The campaign for a Shorter Working Week

In this article Laurie explains the reasons for the surge in the late 1970s in popular support for a shorter working week, starting with the demand for a 35 hour week.

He joins together the history of the demand in the union movement, the immediate developments unfolding at the time, the drive coming from workers themselves, the “political economy” of the time – impending recession, “structural adjustment” undermining Australian manufacturing, other dimensions of economic and environmental crisis, and, of course technological change – the strategic and tactical challenges that would face unions and their members. 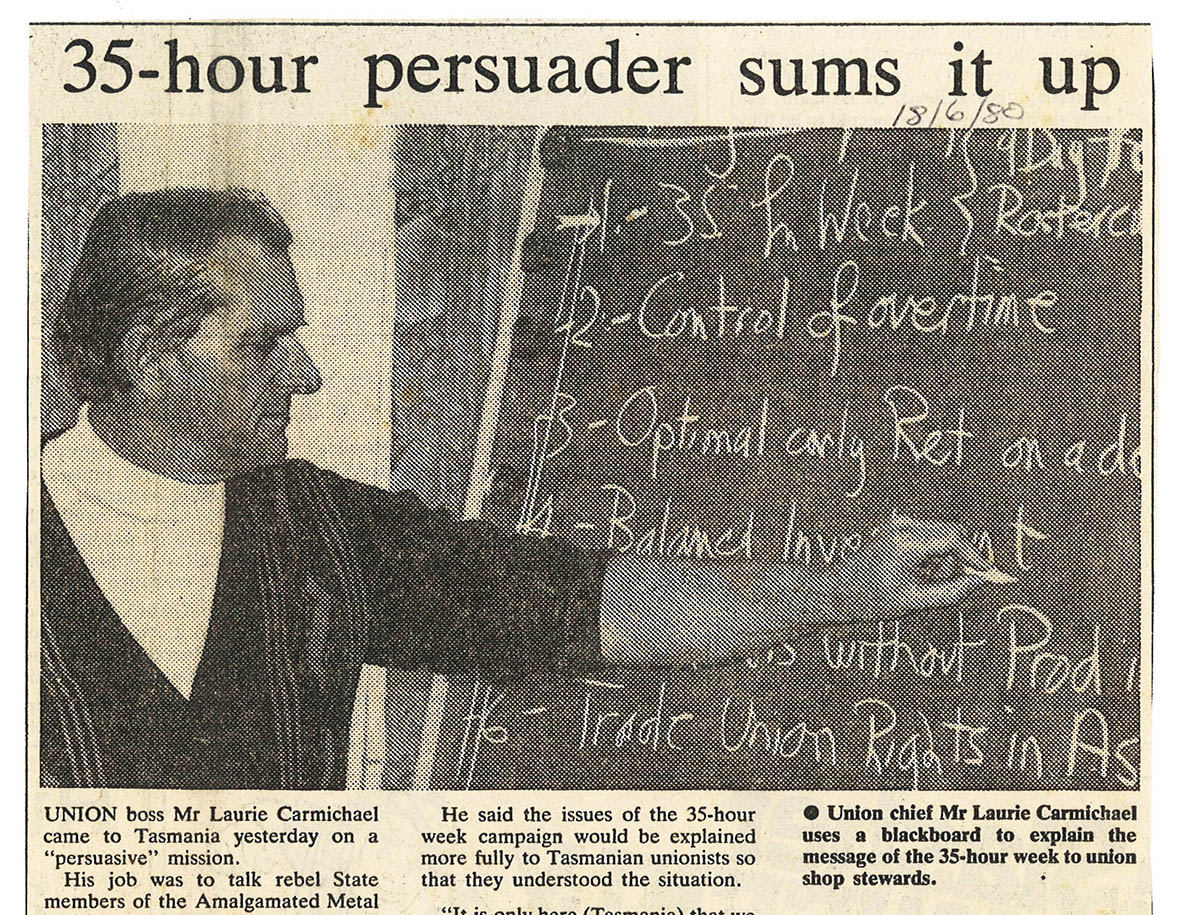 “After the Revolution; (Micro) Chips with Everything”, Laurie Carmichael in Australian Left Review, February 1989

This is the first of several articles that show Laurie Carmichael’s long term interest in technological change and, his interest in applying a study of it to its implications for working people. The Australian Left Review was the analytical discussion magazine of the Communist Party and Carmichael was a regular contributor to it.

The article features a thumbnail sketch of the 4 major periods of technological change and what happened in its interaction with social relations. It concludes with a reminder of how the emergence of the microchip was shaping and was shaped by the macro-political economy of the times: for Australia, its entrenchment as a prime supplier of raw materials dug from the ground.

The article includes a discussion of “Taylorism” that was a feature of union education, starting in the metalworkers union and extending into the work of the Trade Union Training Authority. The purpose there was to study the impact of mass production technologies and processes on workers and, also, on the job classification system, and associated pay relativities, in Australia’s industrial awards. The education discussions included resources like Charlie Chaplin’s 1936 film, “Modern Times”, and other documentary footage of Taylor’s rationale for his “scientific management”: making work so simple that “even a monkey can do it”.

Carmichael also summarises the brief history of the microchip as hardware and its interaction with software. He briefly suggests that employer control of work suppresses and inhibits the liberating potential of software development that could be controlled by workers for the benefit of society as a whole.

Carmichael, with a lot of support and in the face of much resistance also, was arguing that a new award classification system that integrated payment for skills acquired and used would be of great benefit for workers in the near and longer-term future. That led to his great determination to raise the status of vocational education and also to its synthesis with “general education”.

Note: Shop stewards are more commonly referred to as “delegates”, these days. Shop Stewards Committees were formal and informal leadership groups inside the workplace. Shop Steward Councils were regular joint meetings of Shop Committee reps from several workplaces at once.

This article by Laurie Carmichael, Activity of Shop Stewards Councils, was presented to AMWU members in AMWU Monthly Journal in July 1976 as an explanation of a National Conference decision just 7 months after the defeat of the Whitlam Labor government in November 1975.

The Union leadership, here through Carmichael’s voice, was explaining to the members not just that it would continue to fight militantly in the hostile climate of the Fraser LNP government, but also how it would do so.

A careful reading of the article reveals Carmichael’s understanding of strategy for unions and their allies. Not long after he became Secretary of the Melbourne District of the AMWU, Carmichael used his annual leave to concentrate on a comprehensive study of strategy. He used the Mitchell Library and other resources so that he could access the best available material on the subject, including new developments in business strategy.

He is not coy about putting forward his explanation as “theoretical assistance” for shop stewards and members. He had no doubt that they could cope with “theory”; that he could connect the day to day experience of shop stewards to a sensible theory of strategy that they could grab hold of and contribute to through their own efforts starting in their workshops.

It’s worth paying attention to and thinking through some key concepts in the article:

Later, in his “retirement”, Carmichael gave some lectures to prospective union leaders on the importance of strategy. His notes started with: “Without Strategy You are Flying Blind”. There is more to follow on this.

Finally, using these ideas, developing strong workers’ consciousness, Carmichael led the 38 hour week and wages victory over the Fraser government that helped its defeat in 1983.

In this Laurie Carmichael joins with other union leaders in a 1966 seminar organised by the ACTU to discuss automation.

This excerpt from Laurie emphasises the impact of automation on wages and wage relativities, wages policy and bargaining.

This may well be one of the first of such discussions among Australian unions.

Tom Mann was one of the greatest figures of the global union movement at the end of the nineteenth century and into the first part of the 20th century.

Here in this article, in 1976, Laurie Carmichael, then becoming, unconsciously, one of Australia’s finest labour and socialist movement leaders, introduces Tom Mann to the members of the metalworkers union. The article coincides with the decision of the National Council to name the new theatre on the ground floor of the new national headquarters of the union in Chalmers St, Surry Hills, as the Tom Mann Theatre. He is explaining some of their heritage to them. The article – about Mann – also says a lot about Laurie Carmichael himself. It required reading and other detailed research and, also, some serious thinking about the then modern legacy that Mann had left; including that unions should be the centre of the recreational and cultural development of its members. Carmichael alerts the members to Mann’s activities as a socialist unionist and its synergy with political intervention into both the Labor Party and socialism to the left of the Labor Party. Some years after this article was published, new research was published on Mann’s life. There is an updated version of this original Carmichael article that takes account of this research, available on request.