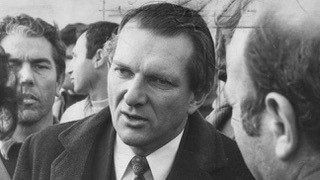 Laurie Carmichael was born in 1925 and raised in working-class Coburg in Melbourne’s northern suburbs. He was the son of an iron moulder, and his family experienced the difficulties of the Great Depression. Carmichael began an apprenticeship as a fitter and turner which he completed only after serving several years in the RAAF during World War II.

After completing his apprenticeship, Carmichael joined the Amalgamated Engineering Union (AEU) in 1943, becoming a shop steward at the Williamstown Naval Dockyard in 1949.

Over the following decades, Carmichael played a pivotal role in the Australian trade union movement. In 1951, while continuing to work at Williamstown, he joined the Melbourne District executive committee of the AEU and in 1958, became full-time secretary. By 1969, Carmichael’s growing profile had seen him elected as the AEU’s assistant national secretary before he carried on this role from 1972 – 1984 when it merged with the Metal Workers Union to become the Amalgamated Metal Workers Union. In addition to his trade union roles, Carmichael was also an active member of the Communist Party of Australia, and later the SEARCH Foundation.

Carmichael’s union activism stresses the importance of workers’ engagement in developing job creation and industry policies. He also highlighted the importance of a strong ‘social wage’ and shorter working hours to the standard of living of workers and the well-being of communities.

For three years from 1984, Carmichael served as national research officer for the AEU, taking on this role just a year after the Hawke Labor government’s first Prices and Incomes Accord. Then in 1987, he was elected to the role of assistant secretary at the Australian Council of Trade Unions (ACTU) with the support of Bill Kelty (ACTU Secretary). In this role he exerted great influence in shaping the union movement's political engagement with the Hawke and Keating Labor governments.

Carmichael believed that the social-democratic planning systems of Scandinavia provided useful insights for Australian unions, including how they facilitated union-based worker engagement in policy-making and economic transformation. His contribution to Australia Reconstructed, the ACTU and Trade Development Council's response to the political-economic change and restructuring taking place in the 1980s, stressed measures including shorter working hours, strengthening manufacturing, and industrial democracy.

Another important element of Australia Reconstructed was its concern with Australia’s continued reliance on exports of unprocessed resource commodities, instead of developing value-added industries and a more diversified economy.

Throughout his life, Carmichael campaigned passionately to protect workers’ rights, including the rights to organise and take industrial action. He was a key strategist in the successful campaign to repeal punitive legislation that prevented workers from lawful industrial action. He also developed innovative workers’ education and training programs to build and strengthen workers’ political capacity. He was a leading figure in the anti-Vietnam war movement, including as an organiser and orator in the Vietnam Moratorium gatherings, and was arrested for his opposition to Australia’s and the United States’ military action in Vietnam.

Laurie Carmichael passed away on 18 August, 2018, leaving a legacy of outstanding and innovative leadership to the trade union and social justice movements in Australia. His lifetime of activism covered numerous themes that remain relevant and pressing today, including:

The Carmichael Centre has been established at the Centre for Future Work at The Australia Institute, to continue the legacy of Carmichael’s activism in these important areas of public policy. The Centre operates with the support of Carmichael’s family, and with funding from three trade unions: the Australian Manufacturing Workers’ Union (AMWU, formed in 1995 through a merger that included successors to Carmichael’s former unions), the ACTU (where Carmichael served as Assistant Secretary from 1987 through 1993), and the Australian Education Union (AEU), Which carries on the struggle for high-quality, public vocational education in Australia.

Laurie’s writings, speeches, and other materials relating to his trade union activities can be accessed via the Digital Archive.