In this short memoir Tony Evans reflects on Laurie Carmichael and Jim Baird. Baird and Carmichael worked closely and with other officials of the union to develop the research and bargaining strategy that would be presented to members. The research usually included information collected from shop steward meetings and surveys.

Tony Evans is a veteran union activist, now retired, and a South Australian. Tony was (is) a multi-union and multi-industry union "mindful militant". Laurie Carmichael pushed him into union roles that involved "active research". He wanted to and was required to work with union delegates and members to produce information that could be used in consultations and confrontations with governments and employers about jobs in the manufacturing industry. 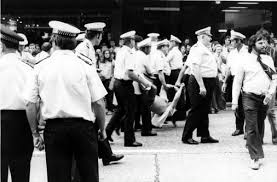 “… this is my good friend Kaye, who has been doing wonderful work with our union in Australia. She is here in Japan doing research into women workers, and I hope you will give her every assistance.”

This great story can be read here.

Among many other things, Kaye Hargreaves was the author of the widely read Women at Work. Click here for more on her valuable book.

https://youtu.be/o6Oxzx6XTwE
Introduction - Don Sutherland
Here we are privileged with a unique insight into Laurie's personal life, including its interaction with aspects of his political and union life. It includes a special description of the whole family's opposition to conscription and the Vietnam war.